Some of my earliest memories as a child were living in our small town and running into of my parents’ friends while we were out and about and hadn’t seen in awhile. I’d hear two of the same lines every. single. time. 1.) “you look just like your mom” (ok… that’s mostly true) and 2.) “you’ve grown up so fast”. Oh the cliche “time flies when you have children.” Before becoming a mother, I partly believed it, but I always thought time wouldn’t go *that* fast. Well, somewhere between the long days and the sleep deprived nights, it happened. Time went by quicker than it could be accounted for.

Our sweet Toby Bear is 5 1/2 years old. Carter turned 4 in October and Maxwell is already 2 months. Stop! When did that happen? It wasn’t *that* long ago that Toby was the tiny, little pup that we picked up in a banking center parking lot. And it doesn’t seem like Carter should be old enough to be going to preschool! Now, I will say that my pregnancy with Maxwell was the LONGEST one ever, but how is he already 2 months old?

When Carter was a baby I documented most of his milestones. We always did his monthly “birthday” photos, but when it came to the big “first,” I probably wasn’t the best about digging out his baby book and writing the exact day it happened on. I didn’t realize that I was slacking SO much until I went to put together his first year photo book. In the yearly books, I try to note memorable milestones “first trip”/”first smile”/”first tooth” and the date. When it came to those I only had a few filled in …. remember those sleepless nights I referenced before.

Thankfully, I took way too many pictures of Carter (and Toby). So I had all of the milestones in pictures and I didn’t even realize it!  All I had to do is pull up the photo details to find the date. Genius! It only took me a few weeks of putting together the book to realize that, but hey it got done!

Now that we are back in the monthly milestone boat with Maxwell, I’ve kinda given up on getting the baby book out every time he looks like he might do something that’s big. To be honest, I don’t think I know where we packed the baby book since we are moving in less than a month. We will stick to taking pictures and documenting it later. I was thankful when Milestone sent us baby cards to help us keep track of all the big things Max has ahead this year!

Looking ahead at all he is going to do like “sleep through the night” has me excited and kind of sad that it goes so quickly. When Carter slept through the night the only thing I had to reference that night was the picture of champagne that Jake and I had in the morning to celebrate. Little did I know, I would kind of miss those late night snuggles where Toby would follow me into the nursery and I would rock the night away with my little baby. There was something so peaceful about those nights. Now that he is 4, there isn’t much going on late a night now except for the occasion where he needs some water. He doesn’t so much need his mom (or dad) for comfort like he used to. Don’t get me wrong, I LOVE that he will sleep on his own especially since we are now up several times a night with Maxwell, but there are nights I just would love to scoop him up and rock the night away.

So when it comes to big milestones I want to remember just how little big they were when they did it. Thankfully, the milestone cards have a place for the date that I’ve been writing in after the photo so if I don’t want to look up when I took the photo they are all on the cards. Anything to make it easier on this mom! Now, if I could just figure out a way to bottle time. Until then I’ll be soaking up every moment with these sweet boys and documenting it along the way. 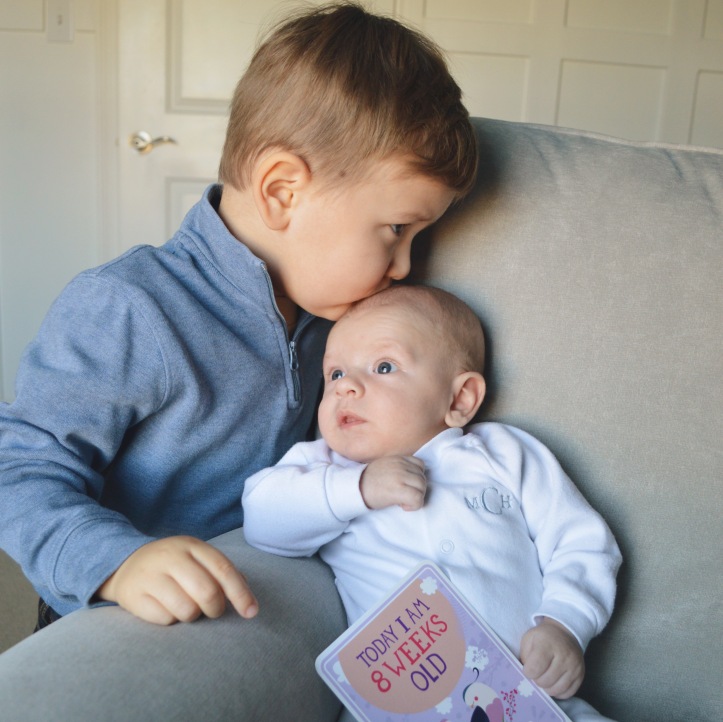